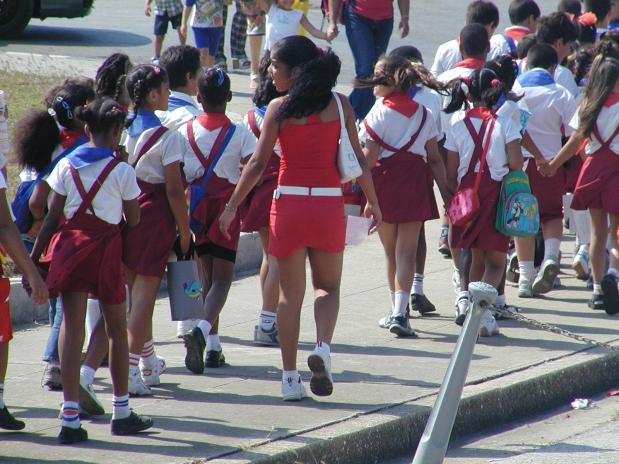 Imagine you are a child or a teenager put on an airplane to another country. Your parents and relatives are not going with you. You do not know the language of the country you are going to. Probably you’ve never even been out of your country, perhaps not even to the other side of the island. Most likely you’ve never been on an airplane before either. You don’t really understand what’s going on in your country (neither do your parents–just that they don’t think the current leadership is going to do what they thought) and expect it to be over soon and you will be back home. But it isn’t. In fact, it still isn’t over for many, as the Cuban Revolution lives on and Fidel Castro, the original “revolutionary leader” ceded power to his brother Raúl.  But you are only 8 or 9, or 12 or 15, at the time when you leave the island. You just want to know: When am I going  home? Where is Mom? Dad? Where are my other brothers and sisters?  Why can’t I stay here anymore? Where is here? Where is home?

Now that the  United States’ policy towards Cuba is opening up, the play “One Day Old” by Iraisa Ann Reilly, comes at an opportune time. This play is part of the Philadelphia Fringe Festival 2016, and was directed by José M. Avilés. The political aspect floats in the background as we watch Wendy, Pedro, Gancho, Tío Juan and others try to make sense of the time shortly after 1959, the “triunfo de la revolución” ( the triumph of the revolution as it is called in Cuba). I attended the preview on September 8, 2016 and was very impressed with the play and the acting.

First off, the play is about the Operación Pedro Pan, which helped over 14,000 children leave Cuba on commercial flights from Cuba to the U.S.A.  from  1960-62, and then later through third countries, such as Spain and Mexico. According to the Operación Pedro Pan website,  many of these children were from middle class and poor families. The children of the wealthy were able to leave with their families and were already installed in the United States. Father Bryan Walsh, a Catholic priest from Miami and Catholic Charities, arranged visas for the children and put them up in camps, orphanages, with relatives or in other private homes.

One Day Old is not explicitly about the Cuban Revolution though, nor is it about the parents and why they did what they did. It is about the children who came to the United States, and what they went through. One Day Old is a very interesting and creative way of depicting the feelings and the experiences of these young people, as well as descendents of these children, when they look back on what they have been told by their parents and grandparents. Ms. Reilly has written a script that is at times humorous, and at other times, sad. We feel for these children and we want to know will they find what they are looking for, what is missing in their lives. Most importantly, will they ever get home?

You might have noticed that the title of the organization that lifted the children out of Cuba has been named “Operation Peter Pan.” One Day Old exploits this name and draws on the fantasy Peter Pan story. The main characters in One Day Old are Wendy, Pedro (Peter) and Gancho (Hook.). There are references and parallels to the Peter Pan fantasy throughout the play. Also, Ms. Reilly weaves reality with fantasy, showing the audience the dream world of Wendy, and explaining aspects of the realities of the Peter Pan children who left Cuba. This fits in the tradition of Latin American  realismo mágico (magic realism).  The play also employs the Cuban musical tradition. There are two lullabies that feature prominently in the play, “Afro-Cuban Lullaby”, which opens the play, and has been arranged and played by famous guitarists, such as Christopher Parkening:

Most of the audience will be familiar with the piece, even if they don’t know the name of it, or where it comes from. There is a version of another lullaby, “Duérmete niño”, which is also sung a capella by various characters and becomes a leitmotif:

The set, props and costumes are basic and abstract, but they are effective. The drama in this piece is so strong and well done that a realistic set is not necessary. One does not miss it at all. The ensemble cast is excellent. I particularly adored the characterizations of “Sara” played by Diana M. Rodriguez and “Hermano/Tío Juan” played by veteran actor/singer Victor Rodriguez. Playing a child AND an adult in the same play and making them both believable is a challenge for any actor, and Victor does it with aplomb. As Sara, Diana contrasted with the children in the orphanage/camp scene by her stance and authoritarian, yet caring speech–even though all the actors were adults. Lastly, the bilingual script is so well crafted with respect to the two languages, that I think even those who do not speak Spanish, would be able to follow the plot and the interactions.

What also distinguishes Ms. Reilly’s One Day Old, is the fundraising. Not only did Ms. Reilly need to fundraise to have the set built, but she is also donating part of the contributions she receives towards the play, to charity. She has set up the “Indiegogo 1960 Campaign” which paid for the set, but which also benefits St. Francis and St. Vincent’s Orphanage. In addition, 10% of every ticket sold to the play during the Fringe Festival is donated to the Children’s Hospital of Philadelphia. This is very commendable. The cast of One Day Old gives the gift of their talent in realizing this play on stage, and funds received/tickets sold also help two charities for children.

One Day Old officially opens tonight, September 9, 2016 at 7:00 pm at the Hamilton Family Arts Center in Philadelphia (Arch and 2nd St.). The play continues at 7:00 pm on September 10, 15, and 17, with matinees at 4:00 pm on September 11 and 18th. If you aren’t in Philadelphia during those days, consider donating to the Indiegogo campaign. For more information about the play and to contribute (click “Support the Play”) , please visit onedayoldtheplay.com

For tickets to One Day Old during the Fringe Festival, please visit http://fringearts.com/event/one-day-old-7/