After processing through the streets of South Philly, following the rhythmic beats on an indigenous drum, we finally arrived at Fleisher. There was a large crowd already mingling on the sidewalk in front of the closed doors. Some were munching on elotes, others stood in line for tacos, and others chatted about the costumed dancers or looked out from painted faces.

The preparation for the Día de los muertos procession and the subsequent celebration inside the building, had begun at least a month before. The previous year I had joined the holiday at the doors of Fleisher, where I waited for the procession and marveled at the life sized skeletal figures that had been created. Seeing the altar inside was the highlight. Here are some photos from this year’s altar:

This year I wanted to be more involved  so I participated in the paper flower making workshop on a weekend early in October. Resident artist, Claudia Peregrina, originally from Mexico, taught and guided us in making the paper flowers from coffee filters. The ages of the participants ranged from four to seventy. Some spoke Spanish, some spoke English. Children especially, were excited to be able to make a mess, so they volunteered to dip the paper flowers in the dye, while most adults cut wires, folded paper and put together the flowers. I don’t know how many I made over 7-8 hours that weekend, but it was a lot. I was dismissed early on the second day to go home and rest.

Since I had spent so much time helping make the flowers that would decorate the altar and the gateway to it, I wanted to do more than just wait at the door. This year I met the procession at its stop at the Italian Market. When I heard the drums and other instruments and saw the group led by a police car escort I got goosebumps and a rush of adrenaline. For quite a while we slowly meandered through the streets of Philly, delighting in the sights and sounds and the overall sensation of joy and gratitude for the chance to remember those who lived before in spirit walked with us. 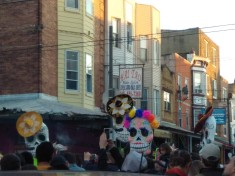 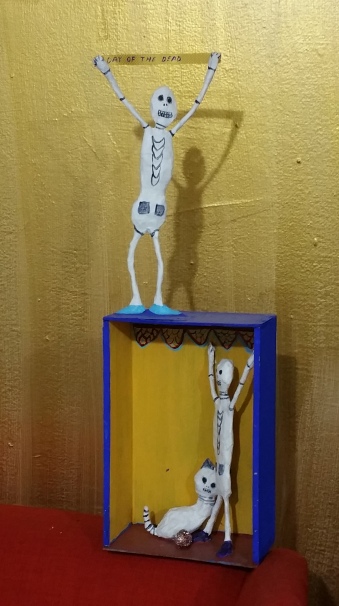 A small group of artists decided to run with the concept of multimedia performance in a show called “La nuit espagnole: Flamenco and the Spanish Vanguard” in the Between The Seas Festival in Lower East Side Manhattan (DROM) on July 24, 2013.

I attended virtually from my laptop since it was streamed live. This was not equal to witnessing this event live since the image was blurry and it was hard to see some of the performers’ expressions. They also did not capture the projections of art work on which this mélange was based. However, the sound was quite good.

The show was an interpretation in music,  dance and images of the “La noche española” exhibition at the Reina Sofia in Madrid from December 2007- March 2008. (For more information on that exhibition:

The dancers were phenomenal. I studied flamenco in New York City, so I know how challenging it is to get your “roll” on the castanets and to coordinate arms and legs while playing an instrument. Unlike some other dances, feet do one thing and arms and hands do something else. It takes training to build up the muscles in the legs and feet. The feet function as another instrument, providing a contrasting rhythm, “zapateo” in the special flamenco shoes. Head, expression and carriage are extremely important to reflect a Spanish style and stance.

It was surprising to see a female dancer dressed in pants and vest, and dancing a farruca, which is traditionally danced by men. This reminded me how far Spain has come in bending traditional gender roles, from the Franco era. At that time women’s behavior was tightly modeled and controlled. Nowadays there are even female toreadores! (bullfighters).

Both singers sang with gusto and technique and expression appropriate to their genres. Even though there was a mix of music—from popular/folk/flamenco to the opera/ballet of Manuel de Falla and the “Córdoba” of Albéniz, the music blended well from one number to the next. This attests to the very strong dance rhythms inherent in Spain’s musical traditions. De Falla was also inspired by popular/folk music (i.e. Siete Canciones Populares) and elements of “cante jondo” from flamenco singing are evident in his operas and ballets.

One can view the show at the DROM website. It won’t be live but it will give you a little taste of Spain, wherever you are! https://www.gander.tv/event/drom-medfest-2013-anna-tonna-724-715pm-9pm