Teatro del Sol took down its sets on Sunday May 5, 2019 after 3 weeks of performances of La Gringa by Carmen Rivera. Several of my students (intermediate Spanish speakers) attended the show during its run at the Latvian Society in Philadelphia, and when asked the question what makes them laugh, they spontaneously replied “that play, La Gringa.” Others, who were second generation immigrants from non-hispanic countries, related to the main character and her struggles to fit into the United States and the culture of her parents and relatives. They too felt as if they belonged nowhere. Others simply were moved by the story and cried when Tío Manolo passed.

The immediacy of these reactions speak to the acting ability of Teatro del Sol’s ensemble, the universality of the script and the accessibility of a bilingual Spanish/English production. If La Gringa had been presented only in Spanish without some kind of simultaneous translation (such as titles on a screen), my students probably would not have understood much of it. Moreover, even if one does understand the language well, the cultural references and jokes are often lost on those not intimately familiar with the culture. If performed in Engilsh, it would be more accessible to a non-Spanish speaking audience, but the language puns and the jibes or references to Maria’s poor Spanish would not have been easy to render.

La Gringa was a low budget endeavor but this new company on the Philly theatre scene, made the most of what they had and then some. (Direction was by José Avilés, stage management, Tanaquil Márquez and lighting by Dalton Whiting).  For example, the sound design by Eliana Fabiyi, reproduced the chirps of the “coqui” (native to Puerto Rico), which are central to the play and its symbolism. The lighting as decoration for the holiday season, set the stage for Manolo’s burst of wellness, and subsequent over the top antics.  Props were few, but the rosary for her grandmother’s headstone, a jacket with the Puerto Rican flag on the back, luggage, Manolo’s wheelchair and a yucca root, were all significant to the plot, and provided just enough visual effect to stimulate my imagination.

The minimal set on two planes, separated by a few steps, created a feeling of depth and distance that facilitated scenery changes, whether in the house, on a farm or in the Yunque forest. 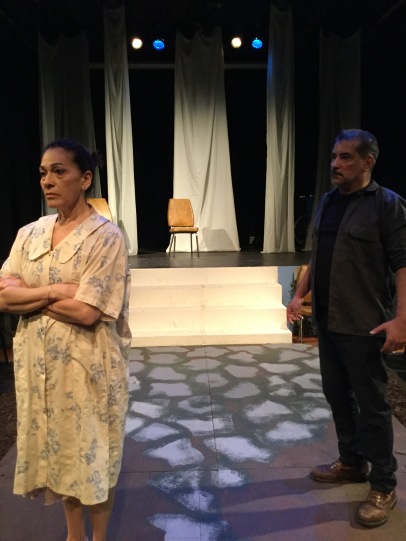 Each audience member’s image of the location was unique, especially if they had never visited Puerto Rico. But perhaps that is part of La Gringa’s strength. Since each of us had to recreate the set in our minds, the characters and the actions were more personalized,  and deeply felt and experienced.

The ensemble cast worked well together and the pace was steady and appropriately quick. As Tío Manolo, Víctor Rodríguez Jr. was hysterical. He and Iris, played by Diana Rodriguez, inspired the most laughter. As Maria’s aunt Norma, Yajaira Paredes, was somber and serious in contrast. Her husband, Victor, played by José Avilés, was an all around good guy, buffering his wife’s abrasive personality from other members of the family.  As Maria, Marisol Custodio is a wide eyed idealist. Her naivete was palpaple and naturally expressed. The character of Monchi, played by Daniel Melo, was a breath of fresh air. Monchi is an engineer turned farmer, and it was encouraging to see a college educated male in the play, instead of the stereotypical latino characters (janitors, gangsters or struggling immigrants) that still predominate in film and television.

This compelling family dynamic and the identity issues faced by Maria, made for a heartfelt and fun theatrical experience on Saturday afternoon, May 4, 2019. Not surprisingly, at the end of La Gringa,  the audience stood up and applauded enthusiastically.

Teatro del Sol has big plans for the rest of the year! To keep abreast of their future productions and initiatives, please visit their website:  http://www.teatrodelsol.org/

I’ve written before about La Fábrica and Teatro del Sol, and the works that they’ve produced, about Picasso, Operación Pedro Pan, and authoritarian regimes (inspired by Venezuela). These newly formed theater companies, both staged plays in Spanish and English in Philadelphia for the past few years. The last production I saw of Teatro del Sol was actually a reading of a play and I saw some of the same actors and directors in the audience and on stage  that I had seen at previous productions of La Fábrica.  I didn’t voice this to any of them at the time, but I felt that a merger would be a good idea. Joining forces would pool their creative energy, and they would not have to compete for audiences, talent and donors.

Philadelphia has a lively theater scene, with larger venues like the Walnut Street Theater and the Arden Theatre, and many smaller companies which do not have a permanent space. To be able to garner enough of an audience for theater in Spanish in a city as small as Philadelphia is a challenge enough for one company, but for even more than one?

Fortunately, the minds behind these two companies were thinking like me, and they decided to merge to form Teatro del Sol.  Spearheading this company are José Avilés, Tanaquil Márquez and Yajaira Paredes. For more information about Teatro del Sol, and what they have planned for bilingual theater,  visit their website.

Coming soon, in Abril, is the popular play, La Gringa.  Although it’s been running in New York City, I’ve never seen it. I’m looking forward to enjoying it in Philly in a few weeks. 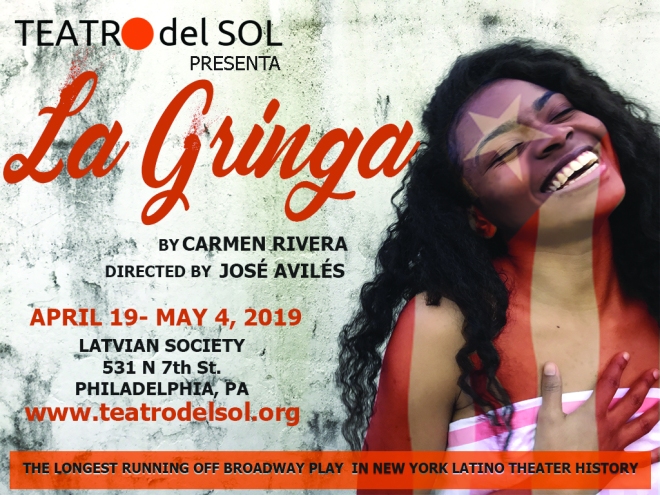