Passport, by Venezuelan playwright Gustavo Ott, is shocking. It had me on the edge of my seat for 65 minutes, as I wished that Eugenia could just be understood, and that the cruel soldier and the sadistic official just had an ounce of decency and would just show some compassion. 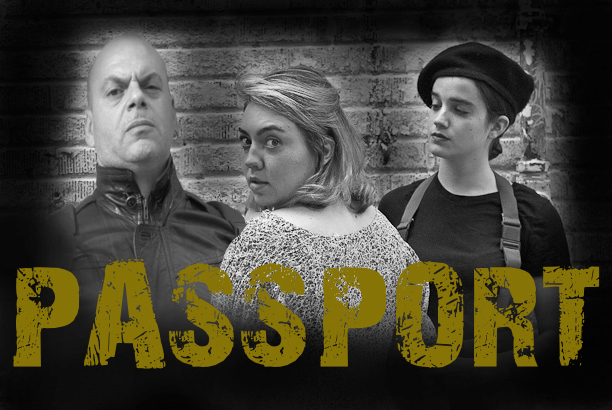 Passport is produced by La Fábrica and plays at the The Proscenium Theatre at the Drake for the FringeArts Festival, from Sept. 12-16, 2018. The cast is comprised of Tanaquil Márquez (Eugenia), Alfonso Rey (El soldado/the soldier)  and Lorenza Bernasconi (la oficial/the official). Passport, directed by Alfonso Rey, is one of the most intense and mesmorizing productions that I have recently seen in Philadelphia.

Despite being a newly formed company (about 1 year old), the production values were high. The program, in the form of a passport, accompanied me on my journey into a world that was both familiar and unknown. The audience is treated as part of the drama, since we had our “passports” stamped as we went into the theater. We all had the proper documentation and were allowed to pass the border, but “Eugenia” was not.

Tanaquil Márquez was stellar and thoroughly convincing as Eugenia. Her acting is gripping and her delivery in Spanish, idiomatic and well projected. This is a challenging role. There is upper body nudity and the character displays many emotions. Based on this performance, Márquez deserves to be seen on the important stages of Philadelphia at least. Lorenza Bernasconi and Alfonso Rey were both compelling in their roles, making it a tight ensemble.

The set, lighting and sound were designed by Márquez and Rey and were perfect for the unfolding of this encounter, allowing the acting to be the focus. The set is almost bare but for a few realistic props and furniture, and the lighting is stark and dramatic. Especially effective was the sound design which utilized recorded music and other noises. For example, the drops of water which fell into metal buckets onstage punctuated the soundscape and the action.

To my ears, the lyricism of the script was exquisite and well delivered by the ensemble. The attempts to understand each other were like mind puzzles. I saw the opening performance at 4:00 pm which was in Spanish. (The shows alternate between Spanish and English, and there are some which are “coin toss.” You find out what language it will be in after you arrive). What makes this work so impressive is the clash between the poetry, the beauty of the language, and the violence of the situation, and how these two elements are depicted. For me personally, this has always been the hallmark of a great work of art–that Gustavo Ott was able to take something bad, an ugly dehumanizing experience and make it into this play is sublime.

Passport was written in the 1990s, but problems of migration and crossing borders are still happening. Tyrannical regimes still exist and military and other officials who cross the line between the humane and inhumane, unfortunately permeate the news every day. The mistreatment of people at the border is a current issue in our country.

Passport is a must see for those who embrace more intellectual theater, latino plays, and/or who care about the migration issues. I look forward to seeing it in English too.  Passport could be anywhere or everywhere. La Fábrica draws attention to the problems and abuses with this moving production.

Passport plays from September 12-16, 2018, by La Fábrica at The Proscenium Theatre at the Drake.302 S Hicks St. Philadelphia, PA 19102 For more information and to purchase tickets in advance: go  online 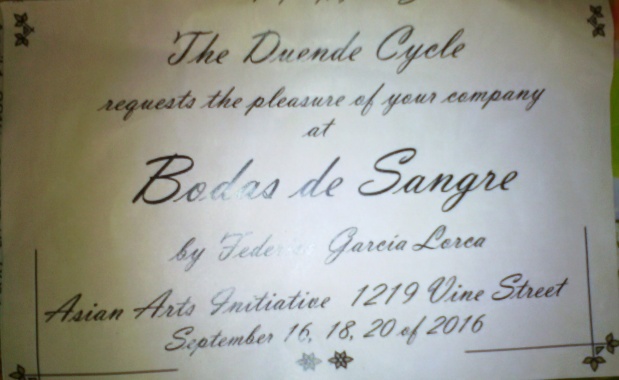 With great admiration I write about the  Duende Cycle’s performance of Bodas de sangre in the 2016 Philadelphia Fringe Festival. I attended on Sunday, September 18, 2016. This scrappy company  recreated and updated Federico García Lorca’s masterpiece and it worked! The concept was created by Eliana Fabiyi and Tanaquil Márquez. Tanaquil Márquez also directed. The nimble cast really brought the play to life and they received a standing ovation at the end.   Lorca’s language is not as poetic and strictly in verse as that of Calderón de la Barca, from the Golden Age, but its structure and Spanish language are still much more formal than what most Spanish speakers in the United States normally speak.  Lorca called it “Poema trágico en tres actos y siete cuadros.” To juggle two languages (English and Spanish) in one production, is another feat. The cast, director and acting coach, Eliana Tabiyi, (also the sound designer) should be commended for the successful rendering of this very important and challenging script.

When I arrived at the Asian Arts Initiative, we were directed to stand and wait for the elevator. It took some time to get up to the third floor because the elevator only held 6 people. At the ticket table they ran out of programs, and we were informed the subtitles were broken. Since I am a fluent Spanish speaker I was not concerned about the subtitles. Before the show started they did manage to give out more programs. The program is quite special–it is made like a wedding invitation, which is very appropriate for Blood Wedding.  This was one of many details that added authenticity and at the same time uniqueness to this production. 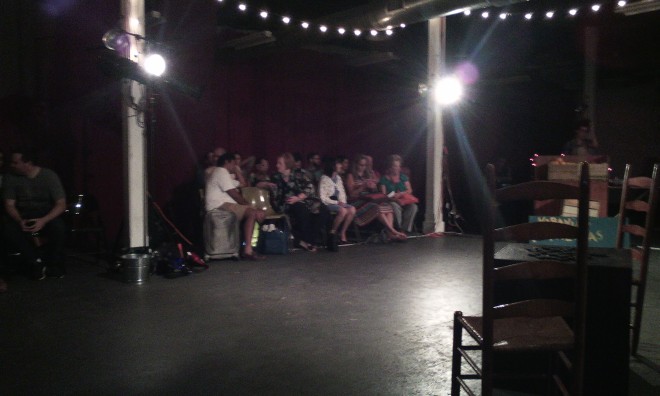 The original play is set in Spain, in a region with vineyards. This current production takes place in Miami. Although we tend to think of California as our wine country, there are quite a few vineyards in Florida. The set included a table and chairs with dominoes, which is very Cuban and Cuban-American. There were group dances–in the beginning to latin music–including hits by Gente de Zona, “La gozadera” (an extremely popular Cuban group)  and Marc Anthony’s “Vivir mi vida.” During the wedding, there is another dance to “Despierte la novia”, which is sung acapella except for bongo drums. It was tinged with a flamenco rhythm. Lorca is so associated with the gypsy culture, that this scene seemed like an homage, a showing of deep respect for the original play and its author.

The set is simple, but extremely effective. The mound of dirt heightened the earthiness, the very visceral feeling of Lorca’s tragedies. It was also a way to create space in a very small area and bring nature indoors. It made sense when La madre comes down from the dirt hill after visiting the graves of her husband and son. It made the swamp believable in the third act as well. Lighting and costumes by Angela Coleman and David Reece Hutchison, were also appropriate and helped flesh out the different locations and characters. 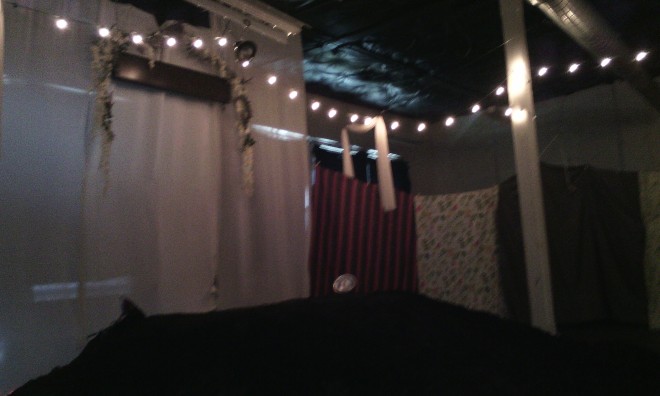 Every actor in the ensemble was strong. Some of the actors convincingly interpreted more than one character.  I especially liked the contrast between La Madre, Yajaira Paredes and La Novia, Aneesa Neibauer. Ms. Parades is obviously a veteran actor, and she has an electric stage presence. She played the mother as a sturdy matriarch. A suffering widow, yet one who maintains her dignity and commands respect. At the other extreme, La Novia, was a fragile young woman. Ms. Neibauer’s portrayal was very natural. This simple and naive bride made you feel sorry for her and believe it wasn’t her fault–when it fact she decided to leave her husband and run away with Leonardo. She could have not married him or she could have resisted Leonardo. I also must mention the fight between Leonardo, (Sidney Gantt) and El novio (Josh Tewell). It was SO realistic. I was expecting that one would really be stabbed and blood would spill. (Of course I breathed a sigh of relief when both actors stood up and took their bows at the end!)

Duende in Spanish has several meanings, but one of them is to have a superior talent, to represent the authentic soul of art.   Duende Cycle showed that in Bodas de sangre. I look forward to their next offering!